I’m thinking there could be a market out there for Giant Guard Squirrels.

I’d start with some Newfoundland dog traits – big and black and a constant drooler, but excellent with children. (I have grandchildren, and I would not like to make them afraid to visit because of grandmas monster pet.)

Then I’d add the fierce independence of a cat, which does not need a human to entertain or walk it, and is too lazy to ever be serious about running away.

Finally, the quick, agile and dextrous traits of a squirrel. They are great climbers and happy to live in trees. Plus they like to gather and hide things, so if you put a big garbage bin close by, it should be easy enough to train them to clean up after themselves.

Then I’d need to build a treehouse and equip it with a huge cat bed. The tree itself would need to bear giant nut-like fruit year round; the nuts should smell like fish and taste like dog treats. I’m sure there are scientists out there with time on their hands who could come up with something.

This incredible super pet would be able to growl, drool, hiss and spit, and fire enormous nuts at intruders and solicitors. It would never want to come into the house to shed on the furniture or chew on your best shoes.

The only people it would allow on the property would be children selling those fund-raiser things for their schools or their sports teams. I have a soft spot for them. When my kids were supposed to do that I would just write a cheque for the entire box rather than have them go from door to door annoying the neighbors and then we would live on chocolate covered almonds for a month. There are worse hardships.

As long as this pet doesn’t ATTRACT kids. That’s a potential problem I suppose, until more families on the block catch on to the advantages of owning their very own Giant Guard Squirrel. Best pet EVER. 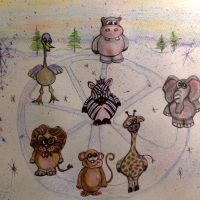