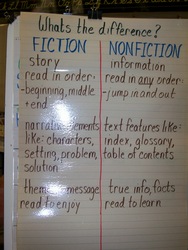 Fiction please. Non-fiction can be pretty fictional too if the facts come straight out of the author’s biased and opinionated little head.

I’d rather read a story based on fact than the other way around. Which would be facts based on stories or stats or evidence. Or the truth, or the only way to do something right, according to some expert know-it-all.

Give me keen and insightful observations, and let me figure the rest out on my own.

On a shopping trip, you catch a glimpse of someone stealing. What do you do?

Some qualifiers here would be nice. Is it a child? Some senile old person? A teenager taking a dare? A businessman in an expensive suit? And what is this person making off with – a pack of gum – lip gloss – 3X control top pink panty hose – a duffel bag stuffed with DVD’s?

Doesn’t really matter. I know exactly what I’d do. Absolutely nothing. Except second guess myself and rationalize it all into oblivion. Not my problem, none of my business.

I work in a retail setting up close and personal with people who for all I know may be stealing the place blind. I reported suspicions about a co-worker once to loss prevention and he eventually lost his job. I was kind of glad that no charges were laid. The humiliation in his case seemed punishment enough. When it was all over I didn’t feel all that proud of myself.

I worked with someone else who was put under constant camera surveillance until there was no question about her guilt. She was a nice enough person to work with, but she had problems and issues I guess.

Those were both incredibly uncomfortable situations, and I felt bad for both of these people. And a little angry and a lot disappointed. But mostly confused about their respective motivations. But that’s really none of my business either.

And I guess if I wanted to be the one apprehending criminals I would have become a cop. Or a prosecutor or a judge. I’m also no behaviour therapist and I don’t feel like saving the world.

I don’t have it in me. I keep ME honest. I can sleep at night.