The reason I know this is because He grows it everywhere.  What I don’t know is who gets to decide what is a weed and what isn’t.  We’re conditioned from childhood to abhor dandelions on the lawn, and to love roses in the flowerbed.  But what child, left to his own devices, would not prefer those bright little low-to-the-ground yellow flowers that are everywhere and can be picked with ease, to something that has vicious thorns?

When my sister was last here to visit me we spent time and money putting a gigantic flower-pot where the fire pit used to be, and filling it with lovely little plants.  It looked quite beautiful and very promising, until the rains came down – day after day after day.  At first I thought this was a great thing, because I never remember to water anything.  But it turns out the pot had no drainage holes in the bottom, and the little plants were drowning in the mud.  I couldn’t save them.  If she reads this she will want to shake me.  This spring W tipped the pot up (that sucker is HEAVY) and drilled some holes in the bottom so that we wouldn’t have the same problem again. 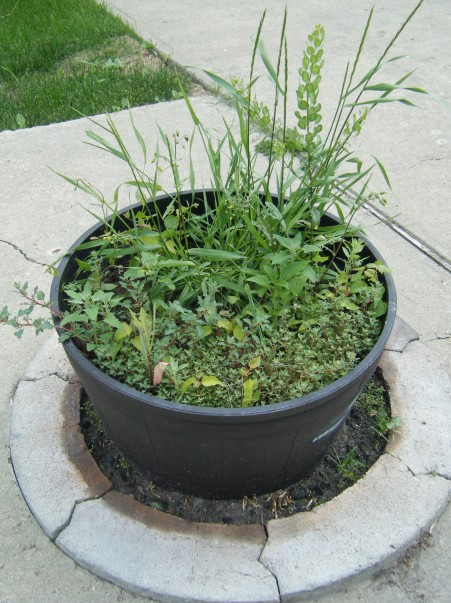 The next logical step would have been for me to get some plants and put them in there, but logical steps are not my forte.  It’s in the backyard, so who sees it but me?  Nobody, except now that I’m posting a picture of it here there could be a couple other people rolling their eyes at it.  But there’s all these green things in it growing away, voluntarily, with no input from me whatsoever.  Definitely my kind of gardening.   I was going to pull them all out, because that’s what a normal person would do with weeds, but then I thought – who do I think I am – some kind of all powerful plant Queen who gets to decide what grows where?  Plus my hands would get dirty and then there’d be just this big pot of dirt sitting there waiting for me to get my butt to a green house and that just might never happen.  So I’ve decided to leave them alone and see what happens.  Perhaps I’ll grow to love them.  They appear to be safely contained and unlikely to spread, so what harm can come of it?  Except maybe for the lawn people having a less than ideal opinion of my horticultural prowess.  And speaking of lawn, that little patch in the top left corner is where the meter moving guys dug a huge hole, filled it up and put down sod.  It’s starting to look a little less dead these days, also without any effort on my part.

This one is looking pretty interesting too, guarded by a sun bleached lamb not found in nature.

All of this should give you a huge clue as to why we decided to give up our garden plot and grow grass there instead.  Before the neighbors came over and torched it in the middle of the night.

Just think of all the money we could save, and what glorious things we could do with all the time we save by giving up the heartless practice of weeding.  All the green houses we could collectively put out of business, if this catches on.

I don’t know if I should be trying to get away with this right under the noses of the Alberta Invasive Plants Council but it’s not like I’m growing that other kind of WEED and selling it on the street.  This is purely for my own amusement.  And because I’m the laziest gardener on the face of God’s green earth.