This is a perfect day to stay away from the retail world and a great day to have off.  It’s the start of the Canada Day long weekend when every serious camping Canadian goes camping in a truly serious way.  That means stocking up on supplies for every eventuality from tropical heat wave to freezing rain and don’t forget the bug spray and enough food to feed a small town for a month.  It’s Murphy’s law that you end up getting a large percentage of these things at the last minute (yesterday and today) and fighting all the other last-minute shoppers to do it.  The reason I know it’s started already is that I got a text from a co-worker from our optical center located in the middle of a madhouse zoo of a big box store.  She said last night was crazy, so today will be worse.

It should be safe to go to work tomorrow once half the population has headed off all over the place in every conceivable direction to camp grounds and other nature infested areas.  My next door neighbors are in the process of leaving. This process has been going on all morning.  Three kids are sitting with solemn faces on the back bumper of an open and jam-packed hatch back watching dad wrestle with dirt bikes and a trailer.  They are learning some new words.  Mom is calmly jamming more coolers into the back seat.  Probably full of dad-calming beer.

When they finally pull out of here it will be safe (and quiet) enough for me to take my thousand pound book into the backyard and finish it this afternoon.

There I am on page 199, marking my progress in sparkles.

And here’s what it looks like to be on page 474, almost halfway there. 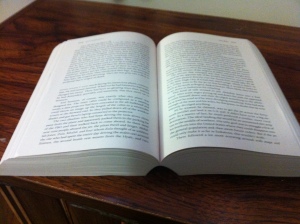 The book is REAMDE by Neal Stephenson, and it’s not just good, it’s amazing.

Quoting from the book description on Amazon…….high-intensity, high-stakes, action-packed adventure thriller in which a tech entrepreneur gets caught in the very real crossfire of his own online war game…….Richard Forthrast, the black sheep of an Iowa farming clan……created T’Rain, a multibillion-dollar, massively multiplayer online role-playing game with millions of fans around the world.

But T’Rain’s success has also made it a target. Hackers have struck gold by unleashing REAMDE, a virus that encrypts all of a player’s electronic files and holds them for ransom. They have also unwittingly triggered a deadly war beyond the boundaries of the game’s virtual universe—and Richard is at ground zero.

Racing around the globe from the Pacific Northwest to China to the wilds of northern Idaho and points in between, Reamde is a swift-paced thriller that traverses worlds virtual and real. Filled with unexpected twists and turns in which unforgettable villains and unlikely heroes face off in a battle for survival, it is a brilliant refraction of the twenty-first century, from the global war on terror to social media, computer hackers to mobsters, entrepreneurs to religious fundamentalists.

It’s definitely an entertaining page turner.  There are a couple of reviews that say it’s not as good as previous things he’s written, so if they’re even better, I guess I’ll be reading those next, but this time on my Kindle to give my arm muscles a break.  And this is a much nicer cover than the one I’ve got, in case things like covers make a big difference in whether or not you read a book.

On a completely different note, and in keeping with my title, today I used a glue gun and DID NOT BURN MYSELF.  Believe me, this is incredible news if you know anything at all about my glue gun history.

Okay, I’m off to tackle the last 600 pages, and this is the last you will hear about it.  I promise.  There could be more on glue guns though.  They have a nasty habit of popping up and wreaking havoc in an otherwise sane and sedentary life.  A life which involves less than zero amounts of camping if I have any say about it at all.