We’re in the middle of an early morning thunder-storm but I am bravely/foolishly continuing to use my laptop in spite of the fact that I could be electrocuted at any moment. It’s called grabbing life by the balls.  Or reckless self endangerment or courting peril, or some made up word that no one has heard of before, like hazardariousness, depending on your point of view.

I’ve been reading some of the writing and editing articles on http://prdaily.com and thinking how wonderful it is that language evolves.  And how there will always be die-hard stubborn stick-in-the-muds who oppose its evolution.  In the interests of keeping it pure and boring.

Take a minute and check out the article here : 15 ridiculous new terms that might make the dictionary  Yes, some of the terms may seem laughable to many of us – mantyhose, for instance.  But maybe I’ve centered that one out because I find the whole idea of tights in general somewhere this side of loony.  Could stem from recalling how I wrestled with them as a child trying to get the crotch to stay above my knees.  There are some experiences that stick with you forever.

Twitlit could be the new haiku.  It’s not easy saying everything you want to say in 140 characters or less.  Unless your name is brian and what you’ve got to say is simply “every single one of these terms are retarded.”  Sad to think brian might not realize how the term “retarded” evolved to mean what he intends it to mean here. And that he might be taken more seriously if he were to use “is” instead of “are” in this instance.  No doubt he thinks cranky old English majors are also retarded.

Horsefeathers and applesauce were expletives in the 1920’s.  A joint used to be a club or a bar.  The cats pyjamas, the cats meow and the bees knees were the greatest and the best of all things wonderful.  In the seventies – wicked, gnarly, bitchin’, heavy and bad all meant good.  Instead of taking an old word and twisting it’s meaning, why not create a brand new one? Or a catchy phrase that says it all?

A passage in the book I’m currently reading (High Five by Janet Evanovich) has Lula describing someone as a slime faced bag of monkey shit.  That may not go down in the literary hall of fame as great literature, but it certainly gets the point across.  And that’s what it all comes down to in the end – communication.  There’s all kinds of ways to say things, and many different ways to look at them.

The thunderstorm is over already.  So much for living life on the edge. Or should I say kamikaze style or balls to the wall, if that’s not too redonkulous for you. 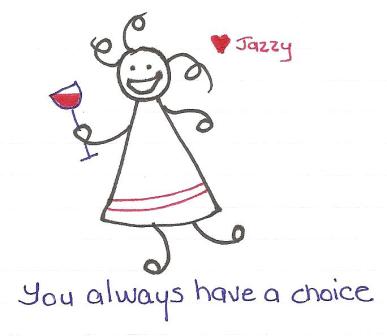