Well how incredibly easy does this look?  I use a lemon every day in my breakfast smoothie and tried for days to ‘leave the center core-like stem intact’.  Those things have a death wish.  But eventually I got serious, and was able to leave not only the stem but lots of the veiny section separaters in a pulpy mess in two lemon halves.

I left them sitting on the kitchen counter for several hours, hoping the juice and moisture would evaporate and that W would not throw them in the compost bin.  Neither of these things happened.

Then I lopped off a little piece of the bottom of each half so they’d sit less tipped over on their sides and poured some coconut oil into each one.

A huge dose of dogged determination and half a box of matches later, VOILA! 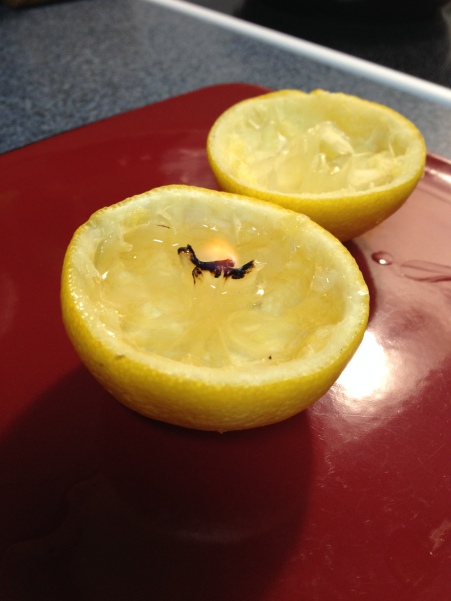 We have fire, some spilled oil, and one more to go.  I know, beautiful, right? Actually they look much better in the dark.

They did burn for hours as promised (at least two, but definitely didn’t make it to three) with a lemony coconut aroma that was only discernible if you got close enough to them to singe your eyebrows.

Would I recommend this craft to everyone who likes crafts?  Of course I would.  Why should I be the only one swearing at gutted lemon halves?

This post is in response to Cin’s Feb Challenge Day 22:  Finger paint/messy craft, written by someone skilled in the art of making even the simplest projects difficult and messy.