“So alive, I swear the pages of this wickedly funny and moving novel are breathing.” —Caroline Leavitt 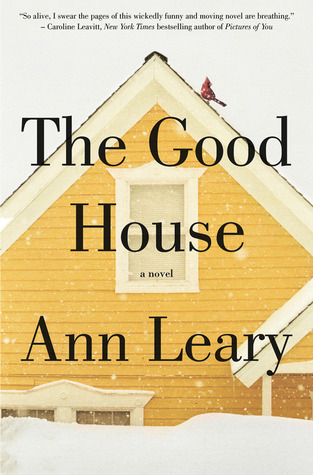 The Good House by Ann Leary is about Hildy Good, a sixty year old divorced realtor, mother, grandmother, and descendant of a Salem witch.  She lives in a small New England town where she has a knack for reading people and is a successful business woman.  She is also an alcoholic in complete denial of her addiction.    The fact that she goes solo skinny-dipping and drunk-driving, makes rambling phone calls in the middle of the night, loses periods of time to blackouts, passes out in her cellar and has excruciating hangovers –  is all perfectly normal sober behaviour – or so she would have us believe.  She is a lonely woman who is her own worst enemy, making mistake after mistake until my pity and concern for her turned to exasperation and I just wanted to yell at her and give her a good shake.  I guess that’s proof that she is a well drawn and believable character, just like her new best friend Rebecca who is also incredibly needy and unhappy and having an affair with Peter, the town psychiatrist.  Frank, the handyman who grew up with Hildy seems to me to be the only character with any sense.  And even he doesn’t have enough of it to make him steer clear of Hildy for his own good.

If all that sounds “wickedly funny” to you, then I guess you will enjoy this book.  But I enjoyed it too without ever once laughing out loud at anything in it.  I suppose I just don’t find addictions all that funny.  Then there is a bit of a twist at the end which I didn’t see coming, so that was a pleasant surprise.

The book is very well written as a rambling account of how things happened from Hildy’s point of view, both drunk and sober. Often I wasn’t sure which details were real and which were vivid but drunken hallucinations.  I also wanted more closure at the end, but maybe sometimes it’s a good thing to find yourself staring at that last page wondering what happens next.  The reader is left hoping Hildy is finally going to pull herself together.  And at the same time not caring enough to anticipate a sequel.  Strange book.  Good, but not funny.