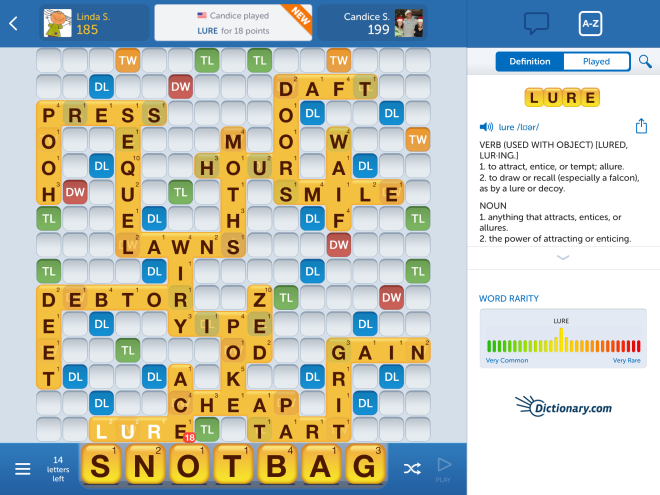 Why is snotbag not an acceptable word?  Why?  WHY??? lol

Oh well, there was really no place to put it anyway.  And the word and the game have nothing to do with the subject of this post, but this screenshot has been sitting in my photos for a long time with nowhere to go and I must have thought at some point it was funny and worth sharing.

For the past several days I have been experiencing vertigo and dizziness and intermittent balance issues.  I have had this before.  It’s easy to recognize and a bit of a snotbaggish pain to deal with.

Benign paroxysmal positional vertigo (BPPV) is one of the most common causes of vertigo — the sudden sensation that you’re spinning or that the inside of your head is spinning.

Man, do they ever like repeating ‘benign paroxysmal positional vertigo’, hey?  You will now probably be able to say it in your sleep or repeat it in random conversations to impress unsuspecting people.

Inside your ear is a tiny organ called the vestibular labyrinth. It includes three loop-shaped structures (semicircular canals) that contain fluid and fine, hair-like sensors that monitor the rotation of your head.

Other structures (otolith organs) in your ear monitor movements of your head — up and down, right and left, back and forth — and your head’s position related to gravity. These otolith organs contain crystals that make you sensitive to gravity.

I have been doing the recommended exercises to move the ear crystals back to the right place and things keep getting better with each repetition. Otherwise I’m okay if I keep my head still and stay upright.  If you’ve never experienced this,  its kind of like being inebriated to the point where the room spins one way and you spin the other and your face is suddenly on the floor and you have no idea how it got there.  Not that I’ve ever done that of course.

So don’t say you never learned anything here on the breathing space blog.  I hope this has been wildly educational.  Especially the snotbag part.

Tuesdays at work wear me out.  We have a doctor seeing patients and I’m there until 8 p.m.  Then I come home and sit at the end of the couch where there is a stupid lamp with such a thick shade that the light hardly comes through it and that’s where I stare like a zombie at my I-Pad for a couple of hours.  That little bit of light is very relaxing, and because of it I can say I’m not sitting alone in the dark.

Because I’m not.  There’s my I-Pad.  I catch up on Words With Friends and e-mails and Facebook and check out that there’s nothing new on Netflix and as a last resort play some Candy Crush.  I drink decaf coffee. I read my current e-book. I am a barrel of fun.

Wednesdays when I’m off work, I always think I’m going to get a zillion things done, because, hey, it’s a whole day, and I’m off.  So I sleep in late, mess around doing nothing for the entire morning (because seriously, I have the WHOLE DAY), do a repeat of Tuesday night with electronic time wasters, drink my smoothie, consume a lot of coffee, wonder what I should make for dinner….  Suddenly it’s evening.  There are three days of work ahead of me, laundry becomes a priority, there’s no time for those projects I’ve been putting off until my day off.  I am lazy and I like to procrastinate, and I excel at relaxing.  You’re supposed to do whatever you’re really good at, right?

Yesterday, like most Thursdays, I worked early and got off at five. There are a lot of hectic people out there running around getting things done in a huge hurry with places to go and people to see and deadlines to meet and WHY IS THAT?  Our contact lens student is one of them.  She got her glasses dispensing licence, went straight into the contact lens course, accepted the position of teaching the glasses course at the same time, is getting married, buying a new house, looking after her son from a previous relationship and her future husbands son from his previous relationship, constantly doing nice things (like baking) for other people, and now she has accepted the position of manager at another store (the store is a ridiculously busy one and she has no managerial experience) and she will start that before any of all the other stuff is finished.  She is twenty-six.  And probably insane.

Someone asked me if I didn’t remember being young and ambitious and I had to admit I’ve never been that ambitious in my entire life.  I want to tell her to slow down, don’t be so impatient, stop being so hard on yourself, get some sleep.  I’m afraid she’s going to burn out before she’s thirty.  And wonder where her life went.

And now it’s Friday and another full day looming, filled with trying to sell stuff to justify my pay cheque.  I’m tired.  And I haven’t even done anything, comparatively speaking.  But I’m not twenty-six either.  I drummed up enough energy to go and get my hair cut last night.  That was pretty exhausting, sitting there listening to another twenty something pink haired girl tell me about her social life.

Yeah.  I’m old and boring.  And ready to pack in this working for a living crap and actually get on with living and doing whatever I want.  And whatever that is, I want to do it very, very slowly.  Because now I know life rushes by while we’re busy thinking about all the things we have to do to get to a place where we can do something else.

And now I have to rush off to work so I can get that over with and then I’ll be able to come home and NOT work.  We’re all running around in circles.  Sit down and let people lap you.  It’s okay.  That’s really all I’m saying.

Ever had some crazy dramatic thing happen in your life that you’d just like to erase from your memory because it’s too stressful to think about?  I don’t believe I’m a horrible person, but I’m not proud of the fact that I have contributed to something that has come back to bite me in the ass.  Idle talk and meddling and the proverbial grapevine will get you every time.  I think my new mantra needs to be ‘shutup shutup shutup’ or something along those lines.  It starts out with little things and gets blown up into big nasty things when you can’t let the little things go and keep your big mouthed opinions to yourself.  I am so done with it all.  Not with being sympathetic and empathetic (or just plain pathetic) but no more fanning the flames.  And that’s all I’m going to say about that. 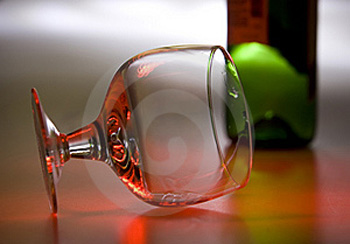 Last night I came home from work and poured myself a glass of red wine to lighten the mood.  Several hours and an empty bottle later my mood was quite improved.  The bottle had already been opened – I’m not a total lush.  Just a partial one.  I watched a Jennifer Aniston movie (Picture Perfect) because she’s a much better actress than she gets credit for, and because everyone needs a feel-good, happy ending chick flick every once in awhile to stay sane.  Then, because there was still a bit of wine left to finish off I watched “Fierce Creatures” starring the cast from “A Fish Called Wanda”.  Much weaker plot but still had it’s own laugh out loud moments.  Perhaps by that point a serious documentary might have made me laugh, who knows.

Today I’m making Pulled Pork in my crock pot with my recently acquired Epicure spices.  I really think that should have a different name.  Sounds like something from a Monty Python skit.

I am continuing to read strange things on my kindle, and seriously need to cool it on the 99 cent specials.  Although there’s always the possibility that eventually something will be SO strange that it will warrant commenting upon in a positive fashion, rather than just thinking to myself “omg that was a complete waste of time and brain cells”.

Speaking of brains, I’m keeping mine from going completely numb by playing “Words With Friends” (a much nicer past-time than the real life gossipy version of words with friends) and a couple of other scrabble-like games on Facebook, plus a game in which I have to locate random objects in different pictures.  I’m trying to improve my powers of observation, being the kind of person who can stare right at something for five minutes without really seeing it.  Or with a brain that doesn’t compute to me what I’m actually looking at.  You might think I’m having deep thoughts and that’s perhaps true part of the time.  The other part there’s just nothing going on at all.

Empty head and a closed mouth.  Lofty aspirations.  Wish me luck.  I think I can do it where it matters. 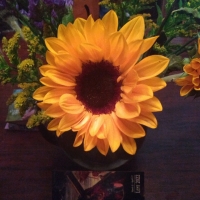